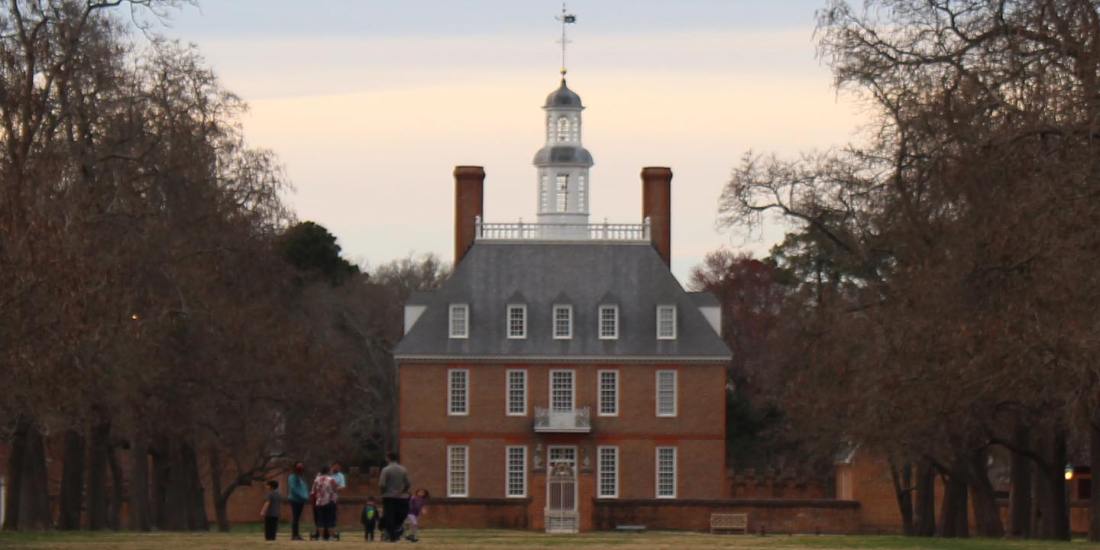 Colonial Williamsburg transports visitors back in time to the eighteenth-century capital city of the largest American colony. As the Colony of Virginia expanded, settlers looked to relocate their capital. Initially, Jamestown served as the seat of government, but a series of destructive fires and the onset of Bacon’s Rebellion in 1676 convinced settlers to search for an alternate location. Other factors, such as the founding of the College of WIlliam and Mary in 1693 further solidified the move. In 1699, the town of Middle Plantation was renamed “Williamsburgh” in honor of King William III of Great Britain. For eighty years, Williamsburg served as colonial Virginia’s capital city. Merchants, tradesmen, and politicians flocked to the area, and helped foster a healthy and prosperous town which grew to around 2,000 free and enslaved inhabitants.

The townspeople of Williamsburg endured the drama of the American Revolution for over a decade. In 1775, the royal governor John Murray, Earl of Dunmore, attempted to unload the powder located in the armory. In response, Patrick Henry and a 150 person armed mob descended on the town and demanded compensation for this heinous act. The royal governor fled Williamsburg, and his power was assumed by the Assembly and later the Virginia Convention of Delegates. In May 1776, the Convention called for separation from Great Britain, a precursor to Viriginia’s own Thomas Jefferson’s Declaration. Patrick Henry became the first governor of Virginia. One of his first acts was to hold an auction of Lord Dunmore’s personal belongings on the grounds of the Governor’s Palace. In 1779, Jeferson became governor and transferred the capital to Richmond a year later.

In the early-twentieth century, William Arthur Rutherfoord Goodwin and John D. Rockefeller Jr. championed restoration efforts at Williamsburg. Goodwin, rector of Bruton Parish, raised the necessary funds to restore the Church. The Rockefellers took a family trip to the colonial town in 1926. Here, Goodwin toured the family around and John ultimately made the decision to preserve an entire colonial town. He was enticed by the idea that Williamsburg “offered an opportunity to restore a complete area entirely free from alien or inharmonious surroundings as well as to preserve the beauty of the old buildings and gardens of the city and its historic significance” (Humphrey Yetter and Lounsbury, 59). Architects conducted surveys under the cover of night and the surrounding properties were quietly purchased. Researchers consulted archaeological findings, architectural history, wills, deeds, maps, drawings, paintings, early photographs, journals, inventories, account books and conducted oral history interviews with older residents in an effort to be as accurate as possible.

Restored and reconstructed buildings now line the streets of Williamsburg. 89 Restored structures are located in their original spots, and have been maintained over the years. Reconstructed buildings are structures that were destroyed prior to the remodel, and rebuilt in the twentieth century. Their plans are based on documentary, archaeological, and pictorial evidence.

My trip to one of the largest living history museums included a great deal of time outdoors. Per COVID-19 regulations, many of the structures were closed to the public because of their capacity limits. The town tried to keep as much open as they were allowed to but the state regulations made it difficult given that many colonial buildings are very small. This closure also affected the Visitor Center. I did get to interact with historical interpreters weaving, carving wood, and preaching in the outdoor areas.

Unbeknownst to me, my visit coincided with lambing season. For over thirty years, the site has revived a rare 18th century lamb. The Leicester Longwool Sheep died out in the U.S. around 1920, but Colonial Williamsburg has managed to bring the flock back. Their wool is incorporated into products used by historical interpreters.

Two of the popular attractions, the Governor’s Palace and the Capitol Building, were open to the public. Although the events of the Revolutionary War unfolded in a restored space, the present-day Capitol building is modeled off of the first structure, which was later destroyed by a fire. Modern day historians have discovered there are minute architectural details that differ between the original and restored structure.  It is considered the most important building standing within the town.

Down the street, visitors can also step inside the Governor’s Palace. Thanks to Patrick Henry’s yard sale, only a handful of objects are original to the structure. The pipe organ and the clock in the dining room are confirmed to be original to the estate. During its operation, 90 staff members worked within the walls of the structure, 50 of them were enslaved. The Governor’s Palace is a luxurious statement. In the entranceway, 540 weapons are on display for visitors, and an imported marble is inlaid on the floor. During reconstruction, historians consulted Thomas Jefferson’s hand drawn floor plan of the original structure. It was also confirmed through the 1930 excavation that the Palace was used as a makeshift hospital and burial ground during the Battle of Yorktown.

One day I will journey back to Colonial Williamsburg – hopefully, when more of their town is opened up.

Colonial Williamsburg offers virtual tours of the Governor’s Palace and the Capitol Building. You can find them here.