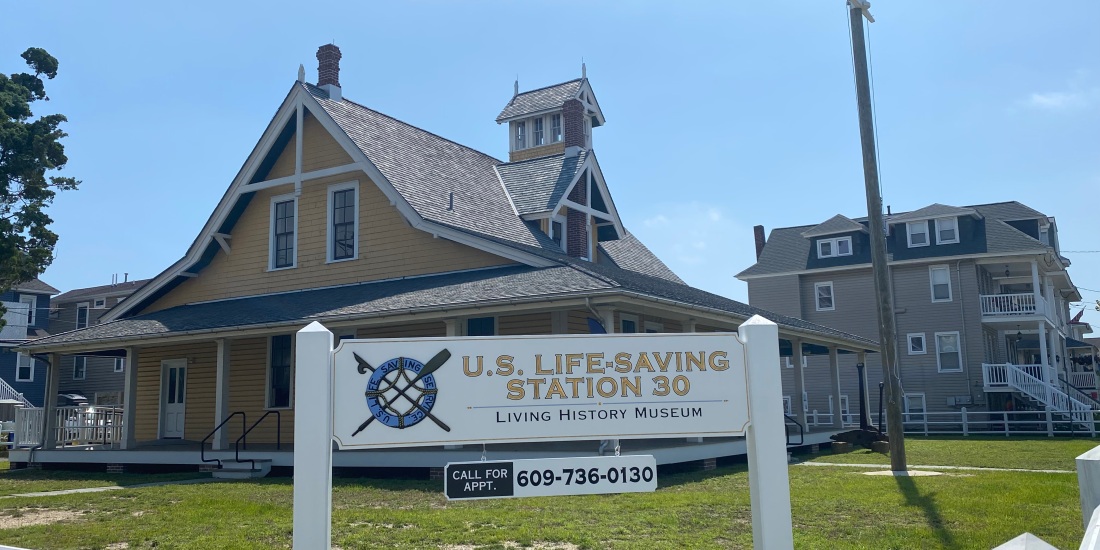 “You have to go out, but you don’t have to come back.”- unofficial motto of the U.S. Life-Saving Service

Heading down to the shore to beat the summer heat? If you travel to Ocean City, New Jersey, you should visit U.S. Life-Saving Station 30. The station is the only surviving life-saving station of its kind. It is listed on the New Jersey Register of Historic Places and the U.S. National Register of Historic Places. Today, Life-Saving Station 30 operates as a living history museum, and aims to recreate what the station looked like around 1905.

In the nineteenth century, Americans relied on shipping for transportation and commerce. Strong storms and sandbars often resulted in shipwrecks and loss of life at sea. Even if passengers managed to survive, few could swim hundreds of yards back to shore. North Carolina is notoriously known as the graveyard of the Atlantic, yet New Jersey’s perilous waters challenged that title. Maritime trade along New Jersey’s coast yielded some of the heaviest coastal traffic in the nation. New Jersey Representative William Newell advocated for federal involvement in lifesaving efforts. The Newell Act of 1848 provided, “surf boats, rockets, carronades, and other necessary apparatus for the better preservation of life and property from shipwreck on the coast of New Jersey, between Sandy Hook and Little Egg Harbor.” Additional funds and revenue resulted in the founding of the U.S. Life-Saving Service in 1878. During its forty-four-year existence, the Life-Saving Service rescued more than 186,000 people. New Jersey’s Life-Saving Service saved over 30,000 lives.

Life-Saving Station 30 was built in 1886. Located a block-and-a-half from the ocean, the men who worked in this building performed numerous rescues along the coastline at all hours. Every week, the men practiced drills. According to the museum, this specific station performed around twenty rescues a month, and attended to shipwrecks four times a month. In 1901, the Sindia, a 329 cargo ship, ran aground at 17th Street in Ocean City. The surfmen at Life-Saving Station 30 rescued all the crew on board. The vessel’s top rudder post, which lies on the lawn outside of the museum, serves as a constant reminder of one of the largest shipwrecks in this station’s history.

The museum aims to teach guests about the men who worked in the station. During its operation, sixty-two men served here. The staged rooms illustrate their living conditions. In the dining room, visitors see blankets draped over the chairs. Men relied on these blankets, because the coal stove could not effectively keep the entire building warm. A wooden box with books is also located in this room. This reading material was rotated between stations every month so the men could entertain themselves.

The kitchen boasts a porcelain sink, cans of food and a telephone where they would receive calls for their services. Men were responsible for providing their own food, and a display in an adjacent room shows hunting instruments and small boats they would have used to achieve this.

The Keepers Room is frozen in time. Inside, a guide spoke with me about the Keeper’s responsibilities. On the desk, visitors are encouraged to pick up a copy of a report the Keeper was charged with filling out after every rescue. The second floor is currently closed to the public. When it reopens, it will contain examples of bunks that seamen would have slept in.

The museum boasts a room dedicated to the lifesaving tools used by Station 30. A replica of a Jersey type surfboat is “docked” in the center of the room. Every station had at least one surfboat at their disposal. Seamen would row these boats out to shipwrecks, and it could hold up to 8-14 survivors in addition to 7-9 crew. The replica at Life-Saving Station 30 was based off of blueprints that the museum staff discovered.

Life-Station 30 also has a life car in its collection. This capsule could carry four or five people to shore from a ship wreck. The individuals had to lie down while the vessel was hauled to safety. This life car saved 201 people from the shipwreck Ayrshire off of Squan Beach in 1850.

Many have advocated to save Life-Saving Station 30. In 1945, the Life-Saving Station was sold and turned into a private residence. The City of Ocean City purchased the structure in 2009, and converted it into a museum. I would encourage you to visit this site, where you can see period-appropriate artifacts, watch informational videos and dive into New Jersey’s rich maritime history.